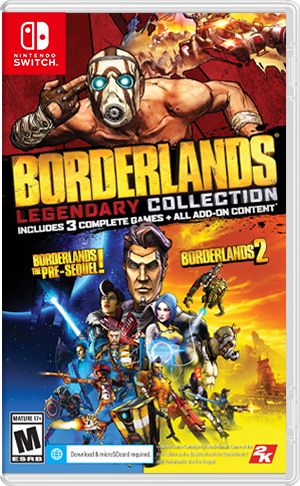 Get three times the mayhem, three times the loot, and three times the action with the Borderlands Legendary Collection! Kill bandits and beasts, collect powerful weaponry, and maybe even save the universe in Borderlands: Game of the Year Edition, Borderlands 2, and Borderlands: The Pre-Sequel, along with piles of bonus add-on content for each game, adding 100+ hours of gameplay at an incredible value*. Enjoy all three games solo or cooperatively with local two-player split-screen or four-player online play Borderlands: Game of the Year Edition - Discover the co-op shooter-looter that started it all, crammed with content and enhancements! Equip bazillions of guns as one of four trigger-happy mercenaries, each with unique RPG skills. Take on the lawless desolate planet Pandora in pursuit of powerful alien technology rumored to be inside an ancient Vault. Borderlands 2 - Play as one of six vault hunters attempting to liberate Pandora from evil mastermind and corporate CEO Handsome Jack. Make new friends, arm them with a bazillion weapons and fight alongside them in a relentless quest for revenge and redemption. Borderlands: The Pre-Sequel - Discover the story behind Borderlands 2 villain, Handsome Jack, and his rise to power. Set between the events of Borderlands and Borderlands 2, The Pre-Sequel gives you a whole lotta new gameplay and features the genre-blending fusion of shooter and RPG mechanics that players have come to love. *Borderlands 2: Commander Lilith & the Fight for Sanctuary add-content not included.